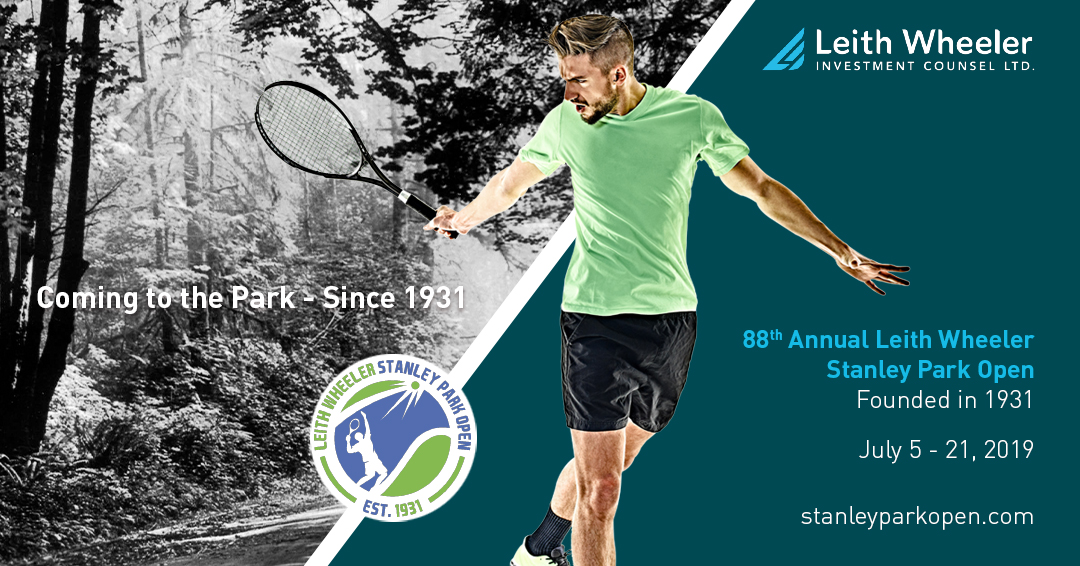 Vancouver, BC – The Stanley Park Open was established in 1931 and has grown since then to become North America’s largest grassroots public court tennis tournament. With approximately 1,500 entries, over 85 tournament categories, and thousands of spectators each year, it is the place to be in July. Tennis BC is proud to partner with Leith Wheeler once again to bring you the 88th edition of the Leith Wheeler Stanley Park Open (LWSPO).

Since 2015, Leith Wheeler Investment Counsel has been the Title Sponsor of the Stanley Park Open. Similar to the LWSPO, Leith Wheeler has deep roots and history in BC. The investment counselling firm was founded by Murray Leith and Bill Wheeler in 1982. With nearly 100 employees today, the company’s headquarters are in Downtown Vancouver, with offices in Calgary and Toronto as well. The firm manages nearly $20 billion for pensions, foundations, endowments, Indigenous communities, and families across Canada.

Leith Wheeler remains 100% owned by a broad cross-section of its firm. This independence is very important to Leith Wheeler because it allows them to manage the firm according to their values of integrity, investment discipline, and independence. These values are not just corporate values, but truly reflect the personal values of the people that make up the company.

Tennis is close to home for many people at Leith Wheeler. Jamie Salvo, who works as a Trade Operations Manager at Leith Wheeler‘s Vancouver office grew up playing competitive tennis, and even competed for the UBC Women’s Tennis Team. Her last name may ring a bell for tennis fans in Vancouver. Her younger brother is somewhat of a local tennis legend, Jeremy Salvo, a coach at Vancouver Lawn and a regular competitor in the LWSPO Open events and Seniors events year-round. The Salvos have competed at the LWSPO since the 90s.

Vice President, Portfolio Manager at Leith Wheeler’s Calgary office, Patti Shannon, has been a prominent member of the Calgary racquet sports community for many years and plays both club squash and tennis. Her three children competed in squash and tennis at a high level, including varsity squash at Princeton and Stanford, and for the tennis and squash teams at the University of Western Ontario. Her middle son, Cory, even competed at the LWSPO a few times.

In addition to being active and passionate about the sport of tennis, Leith Wheelerites are also philanthropic in a wide assortment of worthy causes such as health care, the arts, education, sports and children’s causes. Every year, the investment firm supports dozens of important causes across the country through donations and volunteering. In Vancouver, Leith Wheeler has been a major sponsor of both the Cherry Blossom Festival and the Music in the Morning for many years. This year, they marked the 30-year anniversary of their giving partnership with St Paul’s Hospital Foundation by committing a major donation to the new St Paul’s Hospital Foundation, due to open in 2026. Leith Wheeler is also a national sponsor of Vital Signs, a program that helps community foundations generate data and produce reporting on issues urgent to their community. While creating terrific value for their clients through a combination of sound investment decisions and personalized service is important to Leith Wheeler, making a real impact on the community that supports them is equally as important.